Yes, due to the innumerable requests I’ve had to weigh in on the latest Star Trek movie, I’ve decided to… review Steamboy!   (Because I’d much rather avoid the trainwreck of the latest JJ Abrams Trek movies and enjoy a great steampunk animated feature instead.)

Steamboy: Creation of Katsuhiro Otomo, the incredible artist who brought us Akira!  Steamboy, the animated feature-length film that took ten years for The Steamboy Committee (a conglomeration of production houses that cooperated on the film, much like the production arrangement for Akira) to produce.

Alas, Sony Pictures did not expect much of a reception by American audiences (must have been all those British accents… Americans apparently hate accents that aren’t attached to supermodels), and gave this a limited release… so don’t be surprised if you find yourself saying, “Steam-wha?”  But having adored Akira, and being that I am currently exploring the realms of Steampunk fiction, I’m glad I finally had a chance to see this film.

Steamboy is set in a unique offshoot of that science fiction-slash-fantasy genre-mashup known as Steampunk, which features late-eighteenth-to-early-nineteenth century industrial age mechanics, powered by steam-based systems in some alternate universe where steam has been made as potent as dynamite, and engineers have proven capable of building anything, no matter how impossibly large or complex.  It’s an odd mix of the Industrial Revolution and Victorian morals and ideals with impossibly complex mechanical technology and a complete disdain for the natural limitations of matter, a romantic before-physics-and-fossil-fuels-ruined-everything kind of notion.  And right now, there seems to be one of those technological backlashes going on in the entertainment industry, resulting in a lot of magic, fantasy, and, well, this.  Whatcha gonna do?  You put on your aviator’s jacket and goggles, wind up your pocket watch and go with it!

Steamboy is the story of Ray Steam, third-generation genius inventor, whose father and grandfather have apparently co-invented an amazing steam-ball that uses a rare mineral water and finds ways to compress it beyond anyone’s wildest dreams.  Ray is introduced to the device when his grandfather sends it to him under mysterious circumstances… and immediately finds himself pitted against powerful men who want that device and its incredible power potential for themselves.  As the story progresses, it’s difficult for Ray to know who to trust, even as he discovers that most of the people who want his steam-ball are arms merchants, hoping to become global powers through its control.

A PG-rated story—mainly for violence, which is mostly comic-book harmless but does show a bit of blood—Steamboy is a boy’s adventure romp from beginning to end, with plenty of chase scenes, on-the-fly inventions and cool gadgets to help Ray out of each jam.  Ray is portrayed as a smart and brave but otherwise typical kid; and he’s appropriately unsure what to do in many moments of the story, mainly due to his father and grandfather, who are apparently at odds with each other and testing Ray’s loyalties repeatedly.  As is typical for most boy’s stories, just about every other grownup is essentially an enemy to be escaped or beaten with his juvenile wiles.  Ray also has a potential love interest of sorts, a precocious spoiled brat with the unlikely name of Scarlett O’Hara St. Jones (they never refer to her as Scarlet O’Hara, so it took me a bit before I put the pieces together… oy), but rest assured, not even a kiss on the cheek is exchanged with these kids. 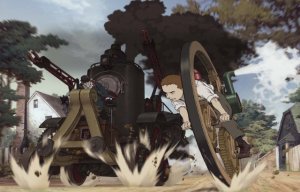 Steamboy uses a mixture of traditional and computer animation to take full advantage of the Steampunk genre.  The colossal engines, victorian-era zepplins, cobbled-together garage inventions and hybrid machine-bastards are the eye-candy of Steampunk, and nowhere have have I seen them better presented than in this production.  Every frame is gorgeous: The backgrounds, machines and action are so beautifully rendered as to elicit oooohs and ahhhhs from those anime fans out there.  I do find myself wishing animators would put as much work into the character’s faces as they did their incredible machines and backgrounds… they all tend to be the very basic of caricatures, as is unfortunately typical of anime.  This complaint aside, it’s hard not to love the look of this production.

In many ways, the movie reminds you of Akira, with its massive scales, world-shattering technologies and themes that make individuals seem as insignificant as ants.  And the ending of Steamboy is Akira-like in its constant escalation of technology-gone-wrong that impacts the very atmosphere around the juggernaut  known as the Steam Castle, and threatens to destroy Manchester, the historic Crystal Palace (early symbol of the Industrial Era that inspires Steampunk), the Queen and, ultimately, the very British Empire.  It is beautifully insane and over-the-top, leaving Ray Steam and Scarlett as about the only ones left standing when the smoke… er, steam clears.

In fact, as I watched the ending, I felt the same as I felt with the ending of Akira: A distinct feeling that the ending was being drawn out and escalated specifically so the animators could show off their artistic skills.  You tend to get this impression from many animated features, for good reason.  Animators like to show why their art is as good as live action, if not better, and animation fans love to see this stuff.  But, just as I did with Akira‘s climax, I found myself wishing the Steamboy director of animation had stepped in and said, “okay, you’ve had your fun… now let’s just wrap it up here.”

Still, if you can forgive the animators’ over-zealous efforts at the end, you’ll find yourself exultant at how much fun Steampunk can be, in the right hands—the hands of the Japanese, apparently.