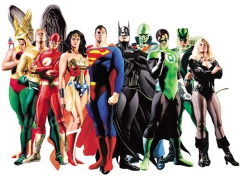 As we approach the midpoint of the second decade of the 21st century, it’s interesting to me that one of the most popular media tropes of the day is that of the superhero, an invention of the 20th century.  Movies and television shows especially have finally reached the stage of special effects artistry to convince us that a man can fly, or transform into another creature, or hit something hard enough to send it into low Earth orbit.  But why is it that superheroes have lasted as long as they have… and will they be impacted by the future?

The idea of beings, more powerful than ordinary mortals, who do mighty deeds and help mortals out of tough spots, isn’t a twentieth century trope; it’s only been around since man has wondered how things in this world work.  His fertile imagination cooked up spirits, then gods, titans, monsters and other creatures, capable of good and bad behavior and sometimes willing to stand up for men and women who couldn’t help themselves.  Always, these beings were gifted with powers and abilities men could not imagine, usually given to them by other gods, or by the energies inherent in nature.

These beings satisfied a psychological need for father figures; that is, someone who could protect us from the worst the world had to offer, things we could not protect ourselves from.  Someone we could conceivably call to loudly enough to have our prayers answered.  Heroes, more or less modeled after men and women given extraordinary powers, were the modern version of these beings, a sort of extension of our own desires to serve and protect others in an unselfish and altruistic way.

The 20th century was represented by the incredible growth of the field of science, a discipline as mysterious as god and nature to many people.  It was also marked by the growing belief that there are other planets out in space, and that they might harbor beings much like us.  Science offered a perfect source of inspiration for men transformed by strange and unexpected scientific advancements or accidents, or beings from the many creature-harboring planets suspected to be in our skies.  In the DC comics line, Superman, a being from another planet, joined new age heroes like the Flash, victim of a science lab accident; Green Lantern, a man given a powerful ring by omniscient aliens; and Black Canary, a woman from another dimension.  Later, Marvel comics gave us Captain America, a man transformed from weakling to champion thanks to an experimental drug; joining forces with Iron Man, a man wearing a technological marvel of a battle suit; Giant Man, who has discovered a formula capable of changing his size; and the Hulk, a man accidentally dosed with Gamma rays until he’d transformed into a barely-coherent monster.

The 20th century found all sorts of ways to apply science to the creation of superheroes, mostly in the form of technological achievements, science accidents, exposure to mysterious radiation or beings from other planets.  These origins came primarily from our rather limited understanding of these technologies and areas of science, and we conjured up weird or unexpected effects of those sciences and technologies to satisfy our fears or hopes for what science was capable of.

But it is now 2013.  We know that the likelihood of humanoid aliens on nearby planets, or even planets in other star systems, is incredibly slim.  We know that gamma radiation will not strengthen your body, no lab accident is likely to give you incredible speed or the power of invisibility, a hard shell isn’t enough to protect your body from major impacts, and being born of parents who were exposed to atomic radiation during World War II most likely means an increased risk of developing leukemia.

We’ve learned more about science and our world… we’ve grown up.  But at the same time, we still have a base desire for beings greater than us, capable of using extraordinary powers to protect us.  Will we continue to draw upon the same 20th century notions of the imaginary potentials of science… or will we use notions of new tropes to create our superheroes of the 21st century?

Though we’ve learned a lot about science, we have come to realize that we still have a lot to learn about biology and the limits of physiology, something barely touched upon in the last century.  As today’s scientists experiment with DNA and stem cells, the layman sees attempts to improve the human body, to eradicate disease, to quell the need for exercise or the requirement to watch what we eat.

We are also furthering our experiments into synthetic materials that might substitute for or augment human bone, muscle or organs.  And we are experimenting with nano-machines that can operate within our bodies, making adjustments to our systems at a cellular level.  We may be on the cusp of replacing human body parts with new ones, and installing micro machines that can augment or repair our bodies as needed.

Out of the mystery of what may be possible, comes the seed for future heroes born of advanced biological experiments succeeded (or failed).  And as we still don’t have a complete knowledge of the mechanations of DNA and other biological functions, or the limits of technology-augmented biologic systems, we can conceive of men and woman gaining powers and abilities beyond our ken through bio-augmented means.

We’ve also learned a lot—but not enough—about physics, including the possibility of other dimensions, the existence of sub-atomic particles and activity only guessed at fifty years ago, and the strange laws of quantum physics.  Our lack of knowledge and understanding leaves us wide open for characters built upon our speculations about the nature of science and physics at the subatomic or other-dimensional level.  Access to other-dimensional data or capabilities, possibly sources of energy, or the means to travel from place to place in unique ways, beckon to us.

So, should we expect the superheroes of the 20th century will be replaced by those of the 21st?  And what will these 21st century heroes be like?  Will they fly via alien ability or technical means… or will they utilize other dimensions to move from New York to Paris in one step?  Will they beat up bad guys courtesy of a secret formula… or via graphite-laced bones and synthetic muscles?  Will they shoot energy beams from their eyes… or alter the nature of the very physics around him to siphon energy from an attacker?  Will they be from other planets… or from private research lab trials?

We are an imaginative people, capable of taking the things we’ve learned and adjusting our world to suit.  I can’t imagine that we wouldn’t use our newfound knowledge of science and technology to reinvent our heroes, always with an eye to keeping them a step or two ahead of us.  Inventing our own gods to serve our hopes, our fears, our needs.  That’s what we do… it’s what we’ve always done.  So we can look forward to a new pantheon of superheroes, and it shouldn’t be too long now before they arrive.

The superheroes of the 20th century stood above 19th century characters like Zorro and the Lone Ranger, making the all-too-human vigilantes look like dinosaurs in comparison.  In the Alan Moore graphic novel Watchmen, a mild-mannered scientist was transformed into Dr. Manhattan, the first hero with actual superhuman powers, making him unique and groundbreaking amongst men and women with merely human skills and intelligence… the superhero for the new era, who made the others obsolete.  The 21st century superheroes may have the same effect upon the heroes of the 20th, standing so far beyond the likes of Superman and Captain America as to make them look as much like dinosaurs as they themselves did to the likes of Zorro.

What will they be like?  Can we even imagine?