A fairly unimpressive series of circumstances led me to thinking about the groundbreaking series The Prisoner the other day.  It was topped off by an interview with series creator and star Patrick McGoohan, years after the series had its run and became a cult phenomenon.  Listening to McGoohan’s comments on the elements of the show, what was intended and what was not, the problems and the breaks, was truly enlightening.  Something about this show, even decades after its creation, still manages to turn all of my thought processes over to the enigma and revelation that was The Prisoner.

How in the world does a TV show do that? 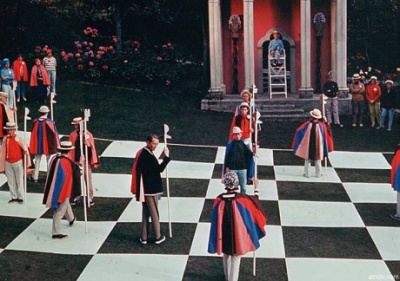 First and foremost, The Prisoner was Patrick McGoohan’s statement, about the state of the world and the people living in it.  McGoohan was in a rare position to make a statement like that, having just finished two seasons of the incredibly successful Danger Man (Secret Agent Man in the states) and having been popular enough to be offered the role of James Bond (which he was comfortable enough to turn down).  When he told his producer, Lew Grade, that he wanted to do something new, Grade was willing to listen… and when McGoohan made his pitch, for an incredibly different and special series, Grade was willing to give him the money to get started.  Only at the height of his popularity could McGoohan have pulled that off… most actors would have been laughed out of the studio with a pitch like The Prisoner. 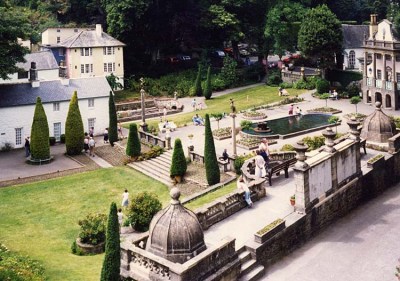 Although many of the elements of The Prisoner were developed for the pitch, some of the elements were there in advance; most notably, the setting of Portmeirion in Gwynedd, North Wales.  McGoohan remembered the place from an earlier visit, specifically, filming an episode of Danger Man.  The unique layout and architecture surely must have spoken to the artist in McGoohan, for, if you take a good look, you realize how much the town’s elements look like live versions of not-quite-finished set backdrops, seemingly sitting around waiting for their moment to be moved onto center stage.  In Portmeirion, all the world truly is a stage; and in fact, McGoohan used Portmeirion’s physical elements like stage sets for his series, to masterful effect.  It’s a wonderful way to represent the way we see the world around us, in varying stages of completeness or “whole-ness” depending on our need or desire to interact with it, and it with us.

Think about it: I’ve never been in the U.S. Capitol.  It rules my life—but it might as well be a hollow plastic shell for all I know or interact with it.  Many institutions, venues and even homes are essentially set pieces to us; we assume we know what goes on inside, and sometimes we’re right… sometimes we’re incredibly wrong, and just don’t know it.  Our world is only as real as our direct interaction with it, and Portmeirion’s appearance is wonderfully iconic of that fact.

McGoohan’s central idea, of course, was his personal displeasure with a society that sought to so thoroughly dehumanize all of us.  His hero, referred to only as Number 6 by others (though never by the hero himself), strives to break the barriers to his own independence and freedom, symbolized by his efforts to escape the Village within which he has been trapped.  When I was younger, Number 6’s drive to be independent and free was of paramount importance to me.  But as I grew older, I began to notice two things: One, how thoroughly (and depressingly easily) everyone around him either was broken, gave in to the inevitable, or died trying to escape; and Two, how malleable Number 6’s own morality turned out to be.

The second point was most damning, to me.  Number 6 was supposed to be the man with the superior moral compass, the one who would stop at nothing to gain his freedom… the Rebel with a cause.  But in fact, “stopping at nothing” often meant betraying others, or even agreeing to play the game that others wanted him to play, such as participating in a clearly bogus election (and being as snidely a candidate as anyone).  When it came to escape, Number 6 was as amoral and untrustworthy as a used car salesman.  I was watching a man who would do anything, short of outright murder, in order to escape his prison… the end justifying the means, and let the chips fall where they may.  Exactly how morally superior is that?

This is the kind of thing that makes me stop thinking about other things, in order to re-re-re-examine what it was about this show that was so engrossing.  When I thought about it, I realized that Number 6, for all his high-minded ideals, was no more a demigod than anyone else: He demonstrated a willingness to sacrifice some ideals, including his total resistance to play society’s games, when he thought it would get him what he wanted.  Which, when you think about it, is no different than what anyone else who has embraced society will do to survive.  Number 6 wasn’t actually trying to escape society… he wanted to be a unique element within it, to have the power to step beyond the pale and above the law, to do the things he wanted to do that society forbade him to do… in much the same way that McGoohan exercised his popularity cache to create a show that most actors wouldn’t get the chance to do.  Number 6 wanted to be a superstar.

But ultimately Number 6 always returned to that society, just as he always returned to the apartment that The Village provided, after every failed attempt to escape, to sleep in the bed that fictional society provided… because it was better than completely abandoning society, stripping off his clothes, and sleeping on the beach.  Similarly, McGoohan may have been creating a unique and special television show, but he was still doing it within the parameters of the established television process, obeying producers, spending their money, following established production procedures… working within society’s boundaries even as he railed against it.

One of the novels of the Prisoner universe, The Prisoner: Who Is No. 2? by David McDaniel, addressed this reality better than most of the television episodes: Number 2 regularly played with Number 6’s patience by first giving him something that only The Village could provide for him… and then taking something away to shatter his sense of calm and predictability, say, a favorite food suddenly unavailable at the grocer’s, or a tool ordered for a repair arriving in the wrong size.  Though he naturally would not admit it to others, the strategy clearly impacted Number 6, and further demonstrated his need for society and the things it provided… even if he refused to admit it to himself.

And at the end of the series, Number 6 was presented with Number 1, who was revealed to be… himself.  A clear indication that he was ultimately master of his own life: He decides exactly how much of society he will accept, how much he will ignore, and how much he will gain or suffer for his efforts.  When Number 6 seemed to free himself from The Village by gaining fame and notoriety within it, and using his new-found position to tear down the Village, we finally see him resume his life… by doing exactly what he was doing at the beginning of the series, re-entering his own adventure right at the beginning and continuing a vicious cycle.  Again, like McGoohan’s efforts to step above television conventions and stand out by… making another television show.

It seems McGoohan’s struggle against the pitfalls of society was a never-ending one, in art and in life.  McGoohan knew, all along, that you can’t truly escape society… you can only find your own way to live with it.  It’s a very grounding reminder to those of us who oppose parts of society and embrace others, that ultimately it’s not our call: Society is what it is; it will not be changed by individuals like you me, or even by most superstars; and our only real choice is decide what we will accept, what we will play along with, and what we will endure in order to survive within it. 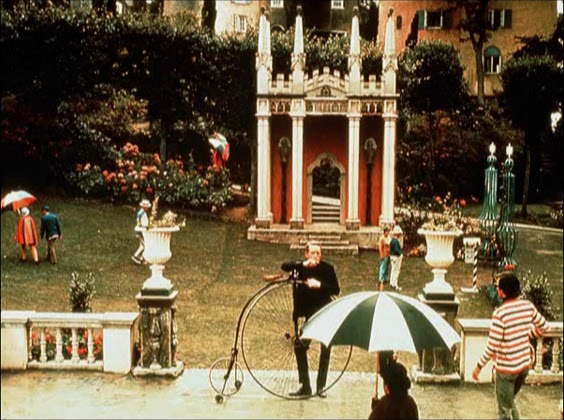 3 thoughts on “The Prisoner: Rebel with a mistaken cause”