Presently, Warner Brothers is working on a Superman vs Batman movie, and simultaneously trying to work out a way to do a Justice League movie featuring their DC comics heavy hitters.  Unfortunately, there seems to be a lot of questions, based on the performance of their most recent superhero movies, whether they can pull off a coup equal to that of Marvel’s Avengers.

To begin with, you need the right story to tell with these characters, and everyone doubts Warner has a story in hand, or even in mind, that will do the job.  So, in the interest of making this challenge interesting, let me suggest that all discussions about the Justice League movie should center around the story of JLA: Heaven’s Ladder.

The Heaven’s Ladder graphic novel is a story on a massive scale and a short timeframe, about—are you ready?—the entire Earth, along with a number of other planets, being abducted by an alien race; forcing Superman, Batman, Wonder Woman, Green Lantern, the Martian Manhunter, Aquaman, Flash, the Atom, Steel and Plastic Man to head off innumerable alien attacks, then confront the aliens.  Turns out the aliens are stealing the planets in order to learn about different species’ beliefs about the afterlife, and what’s in store for them when they die; pretty heady stuff.

This is just the kind of epic scale story that suits DC’s superheroes, characters who are in many ways more god-like than human, and operate an order of magnitude above the heroes in The Avengers (with one notable exception, of course).  Instead of operating in New York, this story takes place in the cosmos.  Most of the Avengers would choke even considering such a scale.  But with its scale, the story is also very self-contained, easy to understand (even if it is pretty outlandish) and fun to watch; the story would easily fall into a 2-hour movie format. 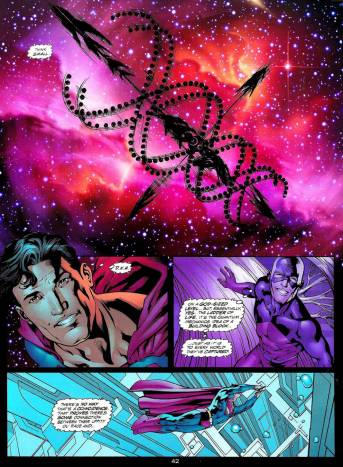 And it doesn’t depend on your knowing any more about the superheroes than most people, who are at least passingly familiar with most of the heroes in the Justice League, already do.  Sure, Steel, Manhunter and Plastic Man aren’t nearly as well known as the other heroes, and never appeared on The Superfriends, but Plastic Man’s power is pretty obvious when demonstrated (think of him like Jim Carrey’s The Mask, able to become anything he wants in an instant), and Steel is DC’s version of Iron Man.  Manhunter seems, in many ways, so similar to Superman that I could see the idea of dropping him from the script entirely; but he does have abilities even Supes doesn’t have (shape-shifting, invisibility, mind reading), and those abilities could be emphasized over the flight and super-strength thing.

The story starts with the heroes together, but centering on the Atom, who is shrunken down and operating on the Martian Manhunter from within his chest. Seeing as both of these heroes are lesser known than the big hitters, this is a great introductory moment for both of them.  Then, when Atom is done, he leaves the Manhunter’s body and rejoins the rest of the heroes, watching the “operation,” and we are introduced to the rest of the cast. 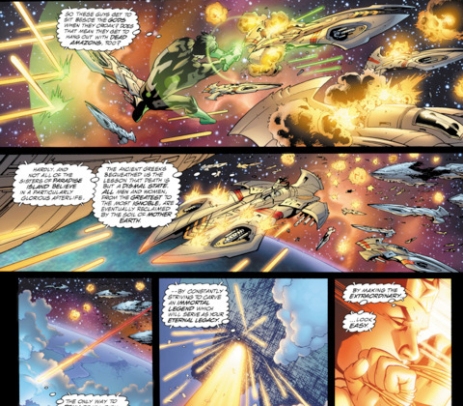 Then, almost immediately, the real action starts.  The heroes work together at first; then, in the middle of the story, the superheroes split into groups of one and two to help other planets with their unexpected crises.  This provides ample opportunity to showcase each hero and make them shine (or, if time becomes an issue, makes it easy to cut time by removing a planetary crisis scene before the climax).  Then they all come together at the climax, each using their unique talents to contribute to the triumph over evil.

It’s true that this story questions life after death and the existence of God… and in the DC comics universe, readers have been clearly presented with God and even his angels (one of them was a Justice League member for a time).  But the story sort of muddies this internal reality with the modern Western “all beliefs are equally respected” attitude, which is largely contradictory with its own continuity, and adds lengthy examinations of different religious concepts.

To simplify the script (and remove a lot of existentialist discussions weighing things down), this idea should probably be pared down to an “alternate planes of existence” trope, ala Star Trek: The Motion Picture. That leaves a basic story about aliens who want to know what happens when they die (and fellow aliens who don’t want to die and find out), and avoids the inevitable religious arguments.  (Hey, if they can adjust the climax of Watchmen, they can do this.)  Then let the action carry the story along.

And this story has the added benefit of showing that the Justice League doesn’t just care about America, or even the Earth, but that they’re ready, willing and able to help people on all planets.  It’s a positive movie with clear good vs evil moments.  Notably, it doesn’t show Superman breaking someone’s neck, or helpless humans being pulverized by falling debris, or alien races getting snuffed by cosmic entities.  It shows a team working together, not sniping at each other or criticizing each others’ methods; the best at what they do, being the best team in the world.  And when all is over, everything is back to normal, a comic book Job Well Done.

In short, JLA: Heaven’s Ladder is a Justice League movie waiting to happen.  It has god-like heroes working together, it has a truly cosmic scale, it’s got a compact, movie-length story, and—if done properly—it could make The Avengers look like The Goonies.

Anyway, that’s my take.  If anyone happens to know someone over at Warner Brothers, feel free to share this post with them.  Armed with this strategy, Warner might have at least a prayer of beating Marvel at their own game.