This IO9 article has recently resurfaced, and since I’m preparing to re-enter the world of conventions soon, I thought it was worth bringing up: Author Emily Finke describes the disagreeable treatment she received at a Balticon, when she cosplayed in a costume from Star Trek and became the brunt of women trying to shame her for wearing such a short skirt, and men trying to show up her Star Trek geek cred.  Her understandable rant takes those fanboys and girls to task for such sorry behavior.

A truckload of comments have been applied to this post, and about the only way I can sum them up is to say that they are either a variation of “You Go Girl!” or “What did you expect, wearing a sexy outfit like that?”  And it immediately reminded me of a post of mine from a while back, mentioning the latest French law that finally took off the books the requirement for women to wear skirts in public.

Why?  Because at issue in both cases is the fact that people (not just women, of course) have the right to wear whatever they want, including clothing that makes a statement about them that they want to make.  It is a matter of personal choice, and assuming that local culture won’t get you arrested for doing it (or you’re willing to risk it)… go ahead and do it.  Emily wore her outfit, which (let’s face it) wasn’t scandalous when it was presented in 1966, much less today.  She made a personal statement that she liked classic Star Trek and wanted to look the part, and it should have ended there. 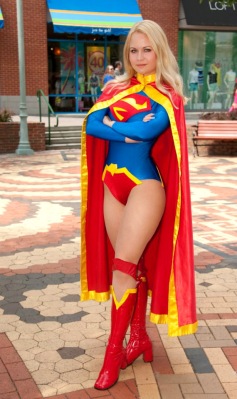 Unfortunately, people are people, and as such, many are prone to little things like jealousy, distrust, sexual stimulation or simple misunderstanding… and attractive girls in sexy outfits have, throughout history, been known to attract both wanted and unwanted attention.  It truly sucks that some people see attractive women as “sluts,” or that others become so physically uncomfortable around them that they don’t know how to act (and we could spend a week on all of the other types of people whom some people react adversely to).  But these people do unfortunately exist, including in sci-fi and fantasy circles, and even Emily needs to accept that they are out there, and likely to do or say something stupid in response to her outfit.

Like the rest of us, Emily can only hope that someone else will mitigate any inappropriate behavior directed her way.  Apparently at Balticon, such people were in short supply that year.  But I would like to think that at Awesome Con, a convention that features a lot of comic book creators, fans and cosplay, that bad behavior will be much less tolerated in the midst of such a diverse audience.

And this is a sci fi, fantasy and comics convention, for pity’s sake; people go there to have fun.  Unlike my article about workplace fashion, people are free to dress as they like, because there is no reason to downplay the differences or attractions of the sexes in a lighthearted convention atmosphere—especially one whose themes regularly include highlighting the differences and attractions of the sexes.  Why anyone would go to such a place, then proceed to pick on someone who shares their interests—one of the few places where someone with those interests can put on a costume and not be laughed at over it—is beyond ludicrous.

So here’s hoping fans like Emily will feel free to dress up as they like; and that others will be able to compliment them on their costume, maybe ask polite questions about it, and even deliver a personal compliment, without crossing the line into creepiness or obnoxiousness.

2 thoughts on “Conventions and “slut-shaming””