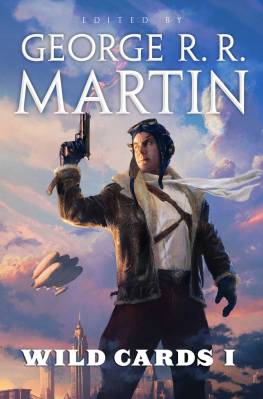 Americans, as a TV culture, have shown ourselves to be truly enamored with two things at the moment: Superheroes; and George R.R. Martin.  His Game of Thrones, with its unique characters, conflicts, violence, sex and dragons, is eating up the airwaves… while right beside it, we watch Arrow and Agents of SHIELD, subscribe to Netflix so we can check out new superhero-based programming soon to be shown there, and go out to see The Avengers and Captain America in the movies while we await The Flash and Batman vs. Superman and the Justice League.

Truly there can be no better time to request—no, I say demand—that the Wild Cards series must be adopted for television, right friggin’ now.

I’ve expounded on the Wild Cards series before; the decades-long series of books about an alien virus that creates superheroes, villains and unpredictable mutations is a pulp homage and a masterpiece of worlds and characters, written by some of the greatest science fiction writers of the last 30 years and co-written/edited by Martin.

The series embodies so much of what the television-viewing public is asking for: Fantastic action; intense relationships and social interactions; sex and violence; political, historical and social relevance; and subtle and overt humor.  There are characters to root for, to jeer at, to sympathize with, and to cry over.  There are science fiction elements, but taken in a light-hearted sci-fi vein (mostly in the form of Dr. Tachyon, the flamboyant-slash-tortured alien whose family released the virus on Earth, and who labors to make amends for their actions and his inability to stop them).

Although the series has none of the familiar characters from Marvel or DC Comics, its own characters are memorable and powerful enough, often evoking the themes that the more popular superhero characters merely touch on, like the difficulty of celebrity, the stigma of being different and distrusted, and the true ramifications of super-powers and super-powered battles.

And each book is so wide-ranging, featuring multiple characters and storylines that tie together into a massive climax at the end, that one book could easily represent the over-arcing story content of an entire TV season.  And there are 21 books.  That’s a lot of TV, brutha.

There is the unfortunate matter of rights that has tied up this series, seemingly from the beginning: With so many characters and storylines created by so many writers, it has been difficult to do anything with the franchise that didn’t step on someone’s toes or require too much money to satisfy someone.  Comic books helped mitigate that by creating their own original characters in the Wild Cards universe; and television could do the same, using certain iconic characters from the books, and inventing new ones to tell new stories.  But the old rights issues are being worked out, and the original novels are being re-released to entertain a fresh new audience.

And these characters will be much more easily utilized in new stories, as they carry much less of the old and often ridiculous baggage that the major comic book companies’ characters have.  Wild Cards has the ability to free us from quaint 20th century superhero conventions and rights-bound insanity and take the superhero genre fully into the 21st century and modern entertainment.

So, let’s hope Game of Thrones takes its course soon, and executives come to Martin for another far-ranging series that can thrill a wide swath of viewers.  Let’s hope someone remembers Wild Cards.  Hell, let’s pray for a Wild Cards series.