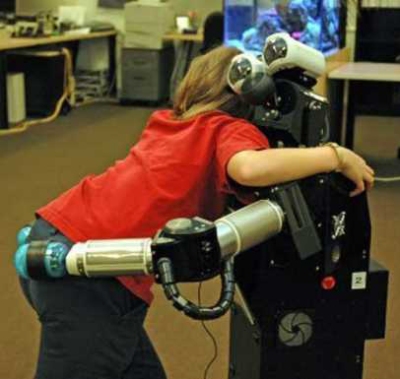 Why’s everybody worrying about the machine uprising?  We’re much more likely to see an uprising of people against the machines.

So says sociologist Zeynep Tufekci in her article about the Third Machine Age.  After the first age, in which machines replaced manual laborers, and the second age, in which machines took over thinking for us, many believe the Third Machine Age will be about machines taking over emotional labor—caring for our children, our sick and infirm, our old.  Tufekci believes that could be the straw that breaks the camel’s back.

In my view, warehousing elderly and children—especially children with disabilities—in rooms with machines that keep them busy, when large numbers of humans beings around the world are desperate for jobs that pay a living wage is worse than the Dickensian nightmares of mechanical industrialization, it’s worse than the cold, alienated workplaces depicted by Kafka.

While some “experts” decry a worldwide labor shortage in care workers, studies indicate that care workers’ positions are not desired by potential workers because they are severely undervalued, socially and financially.

Economists estimate a good kindergarten teacher is worth about $320,000 a year, when measured as adult outcomes of those children she teaches.

The worth of caregivers in the health industry, when measured against the value of time lost to illness in the general economy, is potentially even more striking.

So, what happens when leaders deal with a labor shortage caused by their refusal to pay decent wages… by hiring even cheaper robots to do the work?  What will be the response of a significant portion of the seven billion people on the planet, looking for gainful employment and discovering that industry would rather hire cheap robots to do human work?