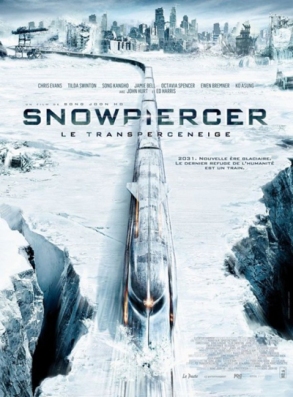 This weekend, I saw the Bong Joon-Ho experience known as Snowpiercer, on hotel pay-per-view.  I’d missed its appearance in theaters, so my wife and I were glad to see it in the hotel’s new releases rotation.  And we’re so glad we saw this movie.

First, it must be said that I realize quite a few people probably missed seeing this movie when it came out, just as I did.  That’s because the distributor, Harvey Weinstein, wanted to make cuts to the movie and add voiceovers for us poor, moronic, nose-picking U.S. audiences… which director Joon-Ho refused.  As a result, Weinstein gave the movie a very limited release, with almost literally no publicity attached (I’d been keeping up with Snowpiercer‘s progress on IO9, and I still managed to miss its release).

But, just like that recently-discovered masterpiece Cloud Atlas, this is one limited release movie that you need to find and watch.  (No spoilers ahead: Track is clear.)

Snowpiercer stars Chris Evans and John Hurt as the leaders of a rebellion, on a train that contains the last of humanity after a science community blunder to fix global warming freezes the planet.  The train, equipped to be self-contained and self-sufficient by its inventor and engineer, travels a track that travels a circuit through every continent, literally circumnavigating the globe once every year.

Generally speaking, in science fiction it is recommended to have one incredible concept, one big conceit, and the rest of the science should be straightforward and understandable.  Snowpiercer‘s train, rocketing through a permanently frozen Earth with the last of humanity aboard, is this movie’s conceit, while the rest of the technology presented to the viewer is pretty much just what you’d expect to see on a self-sufficient train (albeit very stylishly presented).

On this train, society is broken up in a clearly linear pattern, with the rich living up front, the middle class in the center, and the “wretched refuse” riding the back.  And because conditions in the back of the train are so bad, the tail end riders have concocted a way to get to the front of the train and take over the engine by going through stormtrooper-style guards led by Tilda Swinton, playing what can only be described as the social worker from Hell.  This oh-so-literal examination of class struggle might seem trite, but Joon-Ho puts some great twists and turns into the story to keep you entertained.

The characters themselves might make those in a Terry Gilliam film seem staid. (In fact, between one of the main characters being named Gilliam, and much of the treatment of characters and look of the film, I found myself thinking of Terry and Brazil more than once.)  Certain character traits and mannerisms are wonderfully knitted into the story, and you find out their true meaning much later on, adding an incredible depth to this “linear” story.  But where the meanings that come to you in a Gilliam film tend to be for laughs or “Oh cool” moments, Snowpiercer‘s revealed meanings are there for nightmare fuel.

The movie is understandably claustrophobic, especially because there are so few windows on the train; rarely do you have the feeling that you are on a vehicle traveling through the frozen wasteland… except during the few moments when the director wants you to feel exactly that, and presents you with picture windows that allow you to see the frozen wasteland hurtling past.  Otherwise, you’re in a linear world, and that’s all there is; much like the planet that we live on, largely heedless of the fact that the Earth itself is careening through the vast and inhospitable galaxy at impossible speeds.

And thanks to the claustrophobic tableau, the activity on this train is very in-your-face, the action right on top of you, the characters’ choices always reduced to the only two directions available—back, and forward.  Every character’s situation is equally desperate… even those in the front of the train who eventually see those from the back making their way forward, and stare helplessly back like does caught in a car’s headlights.

Snowpiercer is a beautifully-filmed piece (here, I don’t evoke Gilliam, as Joon-Ho’s filmography is much more kinetic and precise than Gilliam’s sense of style, even as it is limited to such small spaces).  Everything inside the train looks equally plausible and incredible, especially as you move further through to the front of the train.  Whereas the back of the train looks nasty and oppressive, the front looks almost like an engineer’s idea of Heaven in contrast.

The outside of the train… barely figures into the movie at all, appearing only sparingly, and never in its entirety until the very end.  You don’t pause in the middle of a tense police drama to check out an exaggerated beauty shot of the city; and neither does Joon-Ho.  The few moments you do see the outside of the train are there to remind you of how insane this trip is, how precarious and at constant risk of catastrophe are the cars and their occupants.

And, of course, the big treat here is that this story is not nearly as “linear” as it seems, its own true meanings revealed at the end.  There are some other great reveals throughout the story, with only one expository moment (from Evans) that seems forced and convenient… and sure enough, plays appropriately into the climax.  And the ending, while not typical of Hollywood Big Damned Happy Ending blockbusters, may be the only one that would even remotely make sense.

Overall, an incredible movie experience, and a triumph for Bong Joon-Ho, marred only by an admirable sabotage job by Weinstein to keep you from seeing it.  Hopefully you did anyway; if not, I urge you to search it out on pay cable, or keep an eye out for the DVD and Blu-Ray releases that just might serve to blow some people’s minds and elevate this movie to instant cult status.

Extra: This video provides a great visual breakdown of Snowpiercer, for you serious Art House fans.

One thought on “Snowpiercer: Don’t miss this masterpiece”