There was an interesting question in IO9’s Postal Apocalypse mailbox this week, which “Postman” Rob Brickman decided to acknowledge as a great question… then pass on answering:

While many issues have been raised about how poorly Star Trek has tackled issues like gender, sexual orientation, and gender identity—and I certainly hope that we eventually get to see Federation citizens pursuing gay relationships and trans* individuals with no one batting an eye—it’s inspired me to wonder about how Star Trek could get out ahead of modern civil rights to tackle something our progressive civil rights movements have not reached yet. We’ve seen this in limited fashion with AI like Data and the EMH, where we explore what it is that constitutes an individual with equal rights and privileges, but I’m wondering about what might come after that. Hive-minds? The transfer of biological consciousness to a synthetic medium?

What’s the next, next generation of science fictiony rights issues that Star Trek could tackle when it someday returns to the small screen? What shape could egalitarianism take on in the 25th century?

I think the takeaway on that is that future fictional postmen in apocalyptic America couldn’t care less about Star Trek.  Clearly they realize how dated and obsolete the franchise is by then.  Nevertheless, I thought it was a great question, too, and would love to take a crack at a response.

The key to conflicts in Star Trek is that someone in their fictional universe does not have the appreciation for a particular group that present-day viewers have—this is to say, they may react adversely to something the viewer views as okay, or they may be okay with something the viewer views adversely.  The original series’ regular mantra was IDIC—Infinite Diversity in Infinite Combinations—and the series did its best to demonstrate that tolerance for all views was the way forward for civilization.

Often, the program placed an antagonist into the story who matched the viewer’s viewpoint, specifically so the show’s protagonist could step up and show the antagonist (and therefore the audience) why their viewpoint should change.  Sometimes even the show’s main characters got to be the antagonists who were shown the error of their ways at the end.  Star Trek has gotten a lot of ground on this storytelling method, allowing it to frame discussions about war, sex, race, leadership, education, religion, family, and the conception of humanity itself (in sub-themes of machine-life, cloning and alien relations).

It would almost seem that Star Trek has covered just about every area of social conflict there could be (which is surely why Brickman decided not to attempt to answer).  But in fact, there are still plenty of areas of future conflict that future episodes of Trek could find itself dealing with.

Trek likes to show us adversaries that become friends in time, most notably the Klingon Empire, and other races (like the Romulans) hinted at in brief future-timeline episodes.  At present, the single most significant adversary in Star Trek television is the Borg, the humanoid-machine hybrids controlled by a hive-mind that tries to assimilate any encountered life-forms to its own.  It would truly be a coup in Trek lore for them to find a way not only to coexist with the Borg, but to work side-by-side and share knowledge… but first, the Federation would need to get over its natural revulsion for the non-aesthetically-modified humanoids and their lack of individual freedom, something humans would see as having been emasculated by machines.  Imagine their encountering people who willingly surrendered to the Borg Collective… horrors!  Dealing with the significantly different attitude and philosophy of Borg-ness would be a great source of conflict in Trek.

The interface between non-Borg Man and Machine is likely to create schisms between haves and have-nots, between those whose augmented intelligence allows them benefits that others cannot attain.  If this creates a schism in society as well, how will Trek’s citizens react to the engineered superiority of these humans?  Will non-augmented people be looked down upon, considered inferior, treated as inferiors?  Will augmented people be considered as taking unfair advantage over non-augmenteds? 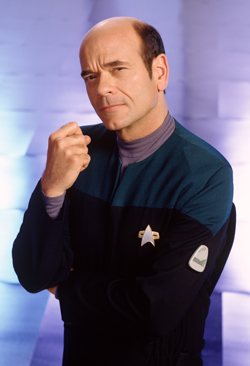 Trek has also investigated the rights of sentient machines, like Lt. Data and the Emergency Medical Hologram (aka The Doctor), from time to time.  If such machines become more commonplace, capable of very different abilities that humans won’t be able to match or surpass, will they inspire prejudice against them?  Will they be given the same rights as humans, given that they only simulate humans?  Or do machines deserve a completely different set of rights?

That pretty much covers machines and machine-organic hybrids… but that’s by no means everything in Star Trek that could create conflict.  For instance, any alien races that were seen as valuable in the Trek universe, but at the same time co-opting or consuming some other life form by their very nature in order to survive, would recall the modern revulsion for slavery/destruction of sentient beings.  Imagine a great race that could only survive through cannibalism… what great meat (heh) for Trek stories that would be.

So far, Trek has trod lightly around the idea of sex: It has done little to acknowledge sexual systems or organisms significantly different from the human norm.  But while sex may be a lesser aspect of some races, we should assume that it could be a more overt aspect of others, maybe even something other races habitually do in public or in unexpected situations.  And we should assume that there are many more sexual combinations beyond the bisexual human standard, and even its occasional derivations.

If other races’ sexual traits and practices were significantly different from humans’ practices, would it impact their living and working together?  Would certain races be banned from certain places and activities due to what they see as natural behaviors for them?  Could humans be similarly banned from certain alien areas for essentially the same reason (being too sexually promiscuous, or sexually immature)?  Suppose we knew an alien race of four separate bodies, four sexes, always joined together when they work (essentially, having sex everywhere they go, even on the job)… would humans be able to deal with that?  Would we see them differently during the rare moments when they separated from each other?

And there is still plenty of ground to cover vís-a-vís aliens that are so significantly different from us as to be almost impossible to communicate with, or even to recognize as beings: If something they did was threatening to us, would we have the right to stop them?  The original series episode “Devil in the Dark” dealt with the existence of a creature humans could barely communicate with, the Horta.  But at the end of the episode, it was determined that the Horta and humans could comfortably cohabit the same planet.  Suppose that were not the case, and the humans would face the question of destroying the creatures, or abandoning years of work and great financial expenditures and leaving a planet they saw as being very valuable to them?  Do we abandon an island infested with ants, or do we break out the bug spray?  What if that island is covered with diamonds, and the creatures are sentient bacteria? 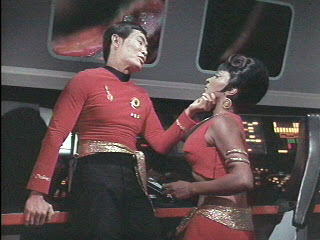 Star Trek has occasionally visited an alternate reality (known as the Mirror Universe), where life in the Federation is not nearly as idyllic as it is in our universe.  But should we judge the other universe as wrong because it’s different from ours?  Do we have a right to interfere in the other universe?  If we knew of a Mirror Universe leader who was the equivalent of Hitler, would those in our universe be bound to try to stop him… even to kill him?  Or should we create an underground railroad designed to shunt as many people in the Mirror Universe over to our own to “save” them?  Would we be in the right to impose our values upon them?  And if so, what would prevent them from coming over here and taking our people away from this “horribly idyllic life” and to their “more sane and proper” dictatorship?

Okay, here’s one that seems light-hearted at its base, but may be the most game-changing of all: Suppose animals were given the ability to talk?  Suppose someone had invented a way to interpret the thoughts and feelings of your cat, and translate those into actual words, to the extent that you could converse with your pet?  If we suddenly discovered that our pets were more aware of the world and their surroundings than we supposed they were, would it be right to keep them as pets any more?  Should we treat them as less-intelligent equals, deserving of our protection, like children?  Should we let them go their own way?  And once we know they understand us completely, should we demand more of them as our companions… would they graduate from pets to servants?

Seaquest DSV‘s dolphin Darwin wasn’t a pet; it was a full member of the crew (with rank).  Simians, birds, dogs and rodents* might prove to be capable of working alongside humans.  Would better communication allow us to elevate animals to the status of our equals… or would humans continue to see them as lesser creatures next to us?  (Seaquest never presented a story where Darwin refused an order or demanded shore leave… what would have been the response?)

And this is a mere scratching of the surface of a few obvious civil rights issues Star Trek could cover.  Clearly there is enough ground to cover a decade or two of future Star Trek episodes.

* You thought I was gonna say raccoons, didn’t ya?  Didn’t ya?

Edit: Of course, these concepts could also be explored in a completely new SF TV series, which I think we need much more than a new Star Trek series.  Something to ponder.

3 thoughts on “What deep concepts could Star Trek ponder next?”