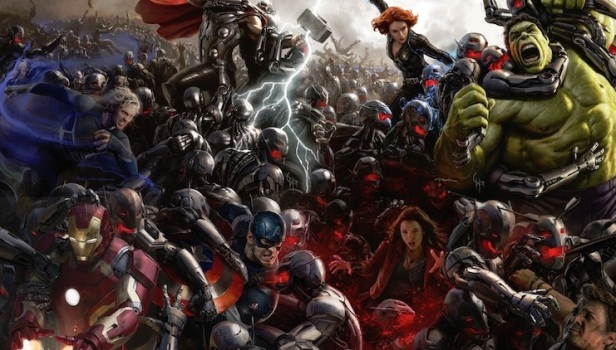 In the last post, I examined Marvel Comics and the refusal of the editors to bring the comic books fully into the 21st century.  At the end, I pointed out that the comic book industry is, in reality, a very small one; and that, if it dried up and blew away tomorrow, it wouldn’t exactly be mourned by the world.

That’s because superheroes are too busy working other venues, most notably the big screen and various small screens, and are demonstrating that that’s where the big money is.  And as we rapidly approach another blockbuster summer movie season, we’ll see even more examples of the real future of superheroes in the 21st century.

Superheroes in movies and television are, of course, nothing new; some of the first movie serials in the 1940s were of characters like Superman and Batman, and we’ve had numerous TV and movie treatments of various heroes since.  But the superhero movement has boomed in recent years.  In May 2015, Avengers 2: Age of Ultron will open in theaters, and customers will again go crazy for superheroes.  Superheroes are the new media action stars, the replacements for the Willlises and Schwarzeneggers of the last era of blockbuster movies.

There are three clear reasons for this: One, superheroes represent ultimate power fantasies; they one-up the John McClanes and James Bonds of the world, whose movie exploits have constantly expanded into outlandish territories of human endurance and resiliency and strained the credibility of movie audiences.  Superheroes ramp up that resiliency and endurance factor by their very nature, allowing audiences to expect and accept even more outlandish exploits and derring-do beyond the abilities of ordinary mortals… and get it.

Two, Hollywood special effects have finally caught up with the superhero.  In past movies and television shows, the limits of practical and optical effects meant that superhero feats occasionally looked okay when viewed through charity-colored glasses, and often looked awful-to-laughable otherwise.  The tagline to the 1978 movie Superman was “You’ll believe a man can fly.”  A more to-the-point tagline would have been: “You’ll believe modern special effects can make a flying man look good.”

But the power of computer-generated effects and augmentation have brought an incredible level of visual quality to the screen.  A modern tagline would read more like: “Holy shit, Iron Man just broke the sound barrier!”

And not just in flying do superheroes now excel: Fighting, impacting large objects, insanely expert gymnastic abilities, the wielding of incredible and unearthly power, and more, are leagues above what movie effects could once make believable.  It’s like the jump from silent film to talkies, or from souped up 50s hot rods to Formula One racers—a quantum shift in effects… well, effectiveness.

And Three can be summed up in one word: Spectacle.  As the art at the top of this post suggests, modern movie magic is fully capable of depicting a superhero team going hand-to-hand with a horde of killer robots… just as the last Avengers movie depicted an alien invasion force, complete with flying space-dragons, attacking us through a portal that led to deep space.  No movies of an earlier era can compare to the level of realistic-looking activity, the number of bodies, the amount of carnage or the scope of view of these modern movies (and, of course, other fantasy-based fare like the Lord of the Rings and Hobbit movies).

And even better, this higher level of realistic effects have been brought to television and online venues as well, in many cases rivaling the spectacle and excitement of their big screen counterparts.  And enthusiasm for the new video medium has already given us some incredible moments, superior storytelling and well-planned scenes, most recently the closing fight scene in episode 2 of the Netflix-airing version of Daredevil.

Though it isn’t an established reason, I’m going to go ahead and add Four: That moviegoing audiences have committed to the total abandonment of realism and realistic science when it comes to summer blockbusters… the less related to their mundane and unpredictable lives, the better.  And especially in summer, where American audiences think of blockbuster movies like roller-coaster rides, something to open the summer season of fun and make them temporarily but completely forget that there’s a real world out there, waiting to prey upon them once the lights come back up.  They are Escapism with a capitol “E.”

It’s no wonder that in this atmosphere, superheroes are king in the box-office; audiences might pick at the story or science in Interstellar or Gravity, but how many people watched the first Iron Man movie and didn’t wish that a cadre of terrorists using human shields could be taken out so easily by one man in armor and some high-tech smart missiles, and not hurt a single innocent?  It’s the world we wished we lived in, the world where people have the power to deal with the craziness we all wish wasn’t out there.  Superheroes show us how easy it is to fight the good fight when you come with extraordinary powers (or are rich enough to buy them).

Critics have been warning that the present superhero craze will die off any second now.  They’ve been making that prediction for the past 3 years, in fact.  But I suspect they will be with us for a long time to come; it may not grow much larger on the big screen, but as the ability to make superhero television shows and online productions increases—and it will continue to increase—this particular form of escapism will stay with us for the foreseeable future.

And, of course, we can’t discount the fact that they are very lucrative, bringing in more in box-office profits in a single weekend than comic book runs make in a year, and further spurring co-marketing and tie-in products, sales of DVDs and streaming subscriptions after the initial run.  As much as people like superhero movies, the studios like making them… and raking in the dough.

And personally—though I always long to see serious science fiction movies and TV shows, and yearn for intelligent fare to sink my neurons into—I like riding roller coasters, too.