Well, Hollywood has treated us once again to a movie about the Fantastic Four.  And once again, it has bombed.  And I mean bombed.  Hiroshima-level bombed.  In a time when superhero movies are almost impervious to box-office failure—when special effects can give us realistic-looking monsters, other-worldly cities of the gods and flying aircraft carriers—when even obscure characters like Ant-Man and the Guardians of the Galaxy can print box-office tickets at will—the FF drop like a lead balloon dumped down one of the Mole Man’s subterranean tunnels.

And my mind has just rolled out through my ear canal and flopped onto the desk.  (Actually, I bet Reed Richards could do that.)  Because I simply can’t comprehend how anyone could manage to ruin this idea.  Multiple times.  As if no one in the movie industry has the vaguest clue as to what they have here.

And I keep saying: Oh, fer cryin’ out loud… how do you keep screwing this up?!?

Then I figure it out.

Now, let’s be clear right out of the box: This isn’t about the cast being too young (though, yeah, I would’ve liked to see four people who seriously look like they may have graduated from college, not Dawson’s Creek… but that’s me).  This isn’t about Johnny being Black; interracial adoption is nothing new or radical (though it is admittedly rare that a Black American family would adopt a blond White girl, it’s not like it’s impossible).  And it isn’t about the altered use of the Ultimates version of the Four’s origin (interdimensional experiments); I actually like that much better than the 1960s origin (flying a space ship through cosmic rays), which is dated as hell.  No; the problems here are much more fundamental than that. 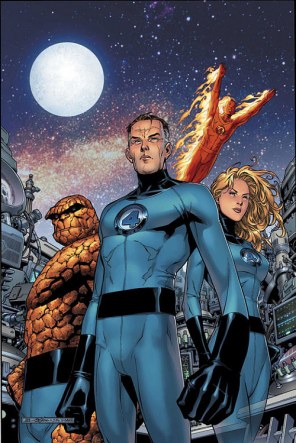 The Fantastic Four may be one of the greatest superhero teams ever created by any comic book company, TV or movie studio.  Period.  In a grand total of four characters, you have an incredible combination of abilities, more-or-less encompassing the four elements—fire, air, earth and water—in a unique combination of personalities that work together because they are a family.  They are brave, optimistic, and smart: They know how to think their way through adversity; but they are also a fighting team, and can dust it up with the best of them when needed.

Most importantly: These are science heroes, not the muscle-bound demi-gods of most comic books.  Following in the footsteps of the legendary heroes of the Science Age, The FF embody the command of human intellect over nature (represented by their powers).  They are explorers, and they use science as their tools (and often to defeat their foes).  The Fantastic Four have gone into space!  They’ve gone into alternate dimensions!  They’ve dealt with aliens, fought creatures from the bowels of the Earth and traveled in time!

But there’s the catch: Studios—like, apparently, most of the United States—are afraid of science.  In a world where science rules our lives and provides the technology which allows people to carry on conversations across hemispheres, take selfies from orbit, buy anything online, drive to work and make a living showing moving pictures to the masses… movie studios see “science” as being defined by radioactive monsters, atomic war, killer robots, malicious AI and hackers stealing our credit cards.  Talk to them about self-driving cars, and they immediately assume those cars will drive us all off of cliffs either to avoid a few baby ducks crossing the road or just out of spite (and then ponder how they can make a horror movie out of that).  Interstellar was released, and fans still fight over how realistic the science was.  Studios, following the example of fans, see science as a threat and a downer.

And so they tried to depict the FF as four kids whose lives were ruined by a scary science experiment. 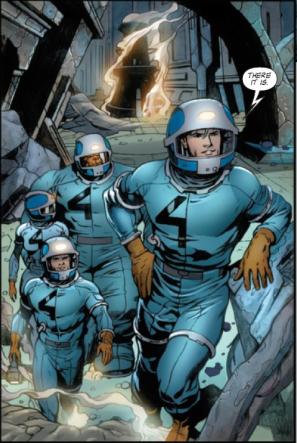 There are reports that the studios who produced the latest FF movie fought with director Josh Trank, forcing it into the “dark, gritty” mold that The Dark Knight trilogy and Man of Steel captured (to significantly mixed success).  That was so, so wrong.  This is the Fantastic Four… not the F***ed-Up Four.  With few exceptions, Marvel movie characters—and especially these characters—are about a bright, modern, World’s Fair world.  If you’re not prepared to make a movie that celebrates science and its capabilities… if you’re not prepared to film optimistic and dedicated people who want to use science to explore the brave new world… you have no business filming the Fantastic Four.

And hey, there’s still some grit to be had, even under all of that optimism: Reed’s poor social skills, Johnny’s recklessness, Sue’s personal insecurities and Ben’s loathing of his ugly form make for a group that can descend into a full-blown dysfunctional mess.  (You know… like any normal family.)  And they even come with an arch-nemesis in Victor Von Doom, another genius who’s also enough of an asshole to create a screwed-up experiment, ignore Reed’s warnings about the setup, get caught in and disfigured by the inevitable accident that followed, and egotistically blame Reed for it.  So, plenty of room for personal drama and antagonism.

And their stomping ground isn’t just New York or some other podunk town.  It’s the interior of the Earth.  It’s the Moon.  It’s the Negative Zone.  It’s the Cosmos.  Their inventions have made them rich and famous.  Their uniforms are encounter suits.  They get around in a flying car and a VTOL rocket.  They have single-handedly stopped alien invasions and the destruction of the planet.

Don’t think it would play?  Actually, it could be a slam-dunk.  Consider that the Iron Man movies captured the proper pro-science theme well; Tony Stark was nothing if not an optimist engineer, using technology to solve the world’s problems.  In fact, both Avengers movies were based on sci-fi-heavy stories (attacking aliens and runaway robots) that the FF could have fit into marvelously.  You’d just need to take it up a notch or twelve, combining the brightness of Iron Man with the cosmic backdrop of Guardians of the Galaxy or Star Trek.  And use those distinct personalities: Make sure they’re acting, not just reacting.

And if you want another example of a show that is science-based and optimistic—even when that science is mostly preposterous—look no further than Doctor Who, one of the most popular sci-fi characters in history.  The FF operate on a similar level with the Doctor, dealing with science-based problems and threats; plus they bring cool super-powers to the table when needed.  Pattern a movie after a Doctor Who-type premise and story, and you’d have a hard time going wrong. 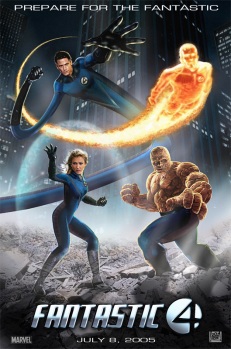 For the record, the 2005 and 2007 Fantastic Four movies were much closer to what the characters should be, as well as the pro-science bias of the movies… especially in the second movie, communicating with and repelling an alien attacker.  Their biggest problems were that the storylines left a lot to be desired… and turning Von Doom into a smarmy billionaire businessman effectively derailed the rivalry between him and Reed, and the effectiveness of Doom as an antagonist.  But they were much closer than the 2015 movie, in look as well as feel of what the FF should be.  A superior set of scripts would have been all those earlier movies really needed to have made them the breakthrough superhero movies that Iron Man eventually became.

So, that’s my take.  Thanks to what we’ve just been inflicted with, it will probably be quite some time before anyone tries to do anything with the Fantastic Four again.  But when they do… they’d better remember what they’re dealing with and do it right.  It’s called science, bee-yatches. Science.

Or they can just go option a Dawson’s Creek reboot and go nuts.