I was just introduced to an independent writer, Chris Stevenson, whose blog is dedicated to increasing the odds of indie writers to get ahead.  The first post I read, A Retrospect of Name Authors, describes the trend he’s noticed in publishing: That authors and celebrities with significant name recognition are landing the big publishing contracts and getting the big bucks… often before they’ve produced actual books. He singled out some examples in multiple genres, as well, and the kinds of deals they’re getting off name recognition alone.  And there are plenty more examples like them: TV and movie stars, politicians, musicians, etc, who use their fame to promote books that, in many cases, they had ghost-written for them.  (Yes, look up.)

Hard to argue the fact, either (As my constant holding up of “Selfish” would suggest).  Names sell, the more famous, the better; and content or quality be damned.  The book business has gone crazy, going for the biggest common denominator above all else in a desperate quest for all the monies they can get from a celebrity-crazed public.  And, amazingly, the public seems to be completely okay with it.  Makes you wonder why we want to break into this biz so bad, doesn’t it? 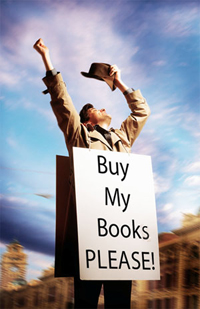 I spend far more time on promotion of my books than I ever spent writing them.  And despite excellent reviews and a 4.4-star average in quality, I get no sales.  Yet people with no demonstrated ability to write (Chris mentions Chelsea Clinton, who’s landed a book deal for a not-yet-written book solely on her relationship to Bill and Hillary Clinton) get contracts and big money.  Could there be any other reason than raw celebrity?

It might be worth noting that many of these literary celebrities were made celebrities, quite literally, by their publishers.  Major publishers use the media to sell their books, and part of that process is teaching their authors to embody a specific persona (best described as “rilly good author”) who can stand in front of the crowds (that the publisher arranged for through media promotion), be photogenic (for the photographers the publisher duly alerted to their presence) and sell their wares.  And if you’re already a celebrity, that’s half the work done; publishers, at that point, only need to stand you in front of the right promotional venues to sell books along with your other products.

I honestly think promotion (and connections to the most popular literary outlets and reporters) is the most important service major publishers offer, more important than editing or book production.  They aren’t just playing the system; they are the system.  They invented the system.  And it’s the main reason independent authors find it so hard to penetrate the business: They are directly opposed by the people who created the literary hierarchy, built the castle and hold the keys to the gate.

And is there anything that an independent author can do to break through that impenetrable gate?  Is the only answer to become a celebrity?  I wish I could say different… but I can’t.  A few people have learned how to get noticed on the outside of the publishing castle; ironically enough, the usual response for a successful independent is for the castle to open up and offer the indie a ridiculous pile of money to come inside and join them.  Presto: No more successful independent—they’ve gone pro, no longer associated with the dung-coated peasants outside.

A few authors have achieved celebrity and success, have been offered a place inside the castle, and have declined.  Can you name them?  You may know one or two, but quite possibly you know none… because the promotional machine inside the castle is actively steering you away from them and into the arms of James Patterson and John Scalzi.

And other authors, like me, wonder if the only thing that’s going to work for us is donning a ridiculous costume and running around in public like an idiot in order to win notoriety, generate media buzz, and create an “in” to get our books noticed.  (Go ahead, laugh.  It worked for Matt Lesko, didn’t it?)