I recently came across a study at the University of Colorado at Boulder that revealed rocket exhausts are damaging to the ozone layer.  Although their impact is presently small—since, hey, we don’t launch that many rockets—as we expand our activities into space, we have to consider the future impact all of those rockets will have on our biosphere.  That means it’s time to think about alternatives to rockets.

Fortunately, science (and science fiction) has provided us with a lot of ideas to kick around; and as we talk about near-term orbital facilities, way-stations for longer voyages and even tourist trips, now is the time to start the conversations and start planning for a better future into space. 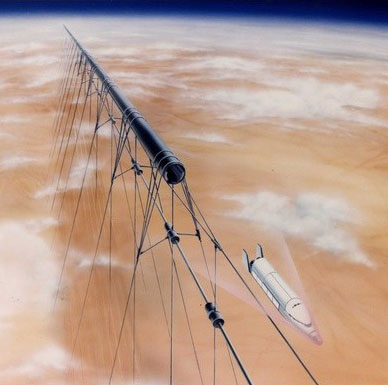 My personal favorite, out of all the proposed or possible systems, may be the idea often referred to as a Rail Gun.  Though the name suggests an archaic system ala Jules Verne, a rail gun wouldn’t use explosives to move its payload… it would use modern electromagnetic systems (maglev) to pull a payload to a high velocity and release it, allowing the payload to continue into space either on its own momentum or with assistive technology (rockets).

A maglev system is not only powerful enough to accelerate a payload to an incredible velocity, but it can do so much more efficiently than a chemically-fueled booster rocket, allowing a significant savings in materials and weight for the overall payload.  Such a system could have launched the Apollo 11 spacecraft and done without the Saturn V booster that was the most significant single element of the launch, used less raw energy doing it, and would’ve significantly cut down on the pollution factor (if the rail gun was powered by clean energy).

A further advantage to a rail gun is the lack of vibration impacting the payload, compared to the thunder and vibration of being strapped to a booster rocket.  Violent vibration has been known to damage payloads, flight and propulsion systems, and has been the direct cause of some of the most disastrous rocket failures in history.  Payloads have to be built extra-resilient to survive the rough flight to orbit, which makes them more expensive (and heavier).  Using a rail gun system would result in a much smoother transition to orbit, allowing payloads to be lighter and less expensive.

There have been a number of design concepts for maglev systems, but I think keeping it as simple as possible is the best approach.  I’d advocate a straight track, extending on a tower as far as possible into the atmosphere, in order to build up as much payload speed as possible at a reasonable acceleration rate (too many Gs of acceleration can destroy your payload).  I suspect such a tower and rail would be most efficient if it was as vertical as possible, and launching close to vertical would mean less atmosphere to travel through to get to orbit, reducing drag.  On the other hand, launching at less than vertical would allow the payload to take advantage of air-fed propulsion, such as aerospikes, to build velocity and achieve orbit; there would be advantages to that system, such as better control over the launch window, that may be worth pursuing.

SF people love to talk about the possibilities of building and operating a Space Elevator, a structure that will run from ground all the way into orbit and allow people and cargo to transit back and forth, also using a maglev system, more efficiently than with rockets. However, I have serious doubts about the practicality of such a venture, primarily due to the incredible difficulties of actually running the cable/tower/structure from Earth to orbit (35,000 kilometers!), maintaining it and suppressing natural forces (like vibration, pressure and possible impacts).  I’m not saying it’s actually impossible… but it may be beyond the technical capabilities of Mankind to accomplish, in the relatively near future or… ever.

Though we may not be able to build a space elevator all the way to orbit, or even a few dozen miles high, it should be within our technological capabilities to build a tower at least a few miles tall… enough to get through a significant part of Earth’s lower atmosphere.  If a system was built tall and powerful enough to get even heavy payloads into orbit… great.  If not, rockets could still provide the added push to get to orbit, but they could be much smaller and lighter (and, by extension, less dangerous) than a heavy booster… by comparison to a Saturn V, it would be like using only the third stage of the booster.  And if technology improves over time, we could expand the tower until it was tall and powerful enough for its payloads to reach orbit.

We have yet to see a serious attempt to build and test a rail gun launch system, but the technology is advancing rapidly enough that it may be attempted soon.  If it succeeds, we’ll see a new alternative to monstrous booster rockets to orbit, and hopefully a significant financial (and environmental) saving for each launch.