A Futurism article written by Denmark Parliamentary member Ida Auken, entitled Welcome to 2030. I Own Nothing, Have No Privacy, and Life Has Never Been Better, presented itself as a blog post from a person living in 2030, and what their life was like.  (Take a look… it’s a short read.  Then come back.)

At the end of the post was the caveat that the article was intended to start a discussion about some of the pros and cons about future technological development.

The article was written in November 2017 for the annual meeting of the Global Future Councils, and sadly, there are no comments on the Futurist page to suggest any discussion was mounted.  But I’ve only just seen the article, and as the author clearly intended, it’s stirred my juices a bit.  So I’d like to make the following observations:

First of all, there isn’t nearly enough detail; the blogger just states what is, not how they came to be… the equivalent of “something cool happened, and now everything’s wonderful.”  So what’s there to discuss?  The level of wonderfulness?

The post suggests in general that all goods, cheap and expensive, simple and durable, have become “free,” leaving the public to simply request anything they want, whether it’s a pair of socks or a flying taxi across town, and they’ll get it free of charge.  It suggests that because everything’s free… no one owns or keeps anything.  Even living spaces are shared with strangers when not being used.

Supposedly this means that these things are now subsidized by some government or institution.  The post doesn’t make clear how far this goes—is a pack of gum free?  How about a plane ticket to Antarctica?  A bucket of caviar?  A prostitute?—but it suggests that no one needs cash for anything.

Does this mean no one actually works for a paycheck?  Do people handle highly-complex tasks, wait on tables and cook for hungry lunch-goers just for kicks?  Or is literally every imaginable job being handled by automation in 12 years?  There is no way to know from the post.  But I will say that accomplishing that in 12 years seems outright impossible.

The suggestion that everything is free for the taking/using also ignores certain human tendencies, like collecting things you like that are readily available.  If I had free access to a shirt that I really liked, I’d find some place to keep it so I could wear it again (in case I couldn’t find it later).  If cars were free, I know people who would want to either obtain their favorite car, or get a free car and decorate/accessorize it to their personal preference, and drive it exclusively.  Millennials and their children have shown no sign that they don’t share these traits.  Maybe the posters have traded homes for backpacks, and carry just a tiny amount of possessions.  Or maybe everyone has a storage space somewhere, holding their stuff.  Are the backpacks and storage spaces free?

I will say the idea that everything is free and no one needs money sounds less likely than the idea that things still have monetary value, and everyone earns a Universal Basic Income allowing them to buy the basics, and work if they are able or desire for money to buy more.  Again, there’s not enough to discuss from this text.

The post also suggests that all items, once used, are reused by someone else or recycled after use.  Though that sounds dandy, it’s not always the most economical or efficient a way to do things; complex items, like cars, are better maintained over time than dumped after 1-2 uses.  I suppose, if everything really is free, then trashing a car after a few uses and building a brand new one may be economically feasible.  But it’s still inherently wasteful.  A disposable economy isn’t the most efficient means of running a civilization.

The post suggests that (largely due to driverless cars) public transportation becomes easier, quicker and more convenient than privately-owned cars.  Granted, if the world ever adopts a fully driverless auto system, where intelligent maps and feedback systems allow driverless cars to move around more efficiently, I can see a lot of improvement to the present transportation system.  But individually-owned cars have the advantage of being able to get you to your destination in the time it often takes for a public or hired car to even arrive at your door; the claim of being quicker may only apply to long trips or heavy-traffic periods, but not for most short trips.  And I can’t imagine any public transportation system easier or more convenient than a car that can take you door to door.

The post also goes out of its way to insult us, asking “What were we thinking” in accepting congestion and pollution in our daily lives.  Since, before clean energy and self-driving clean cars, people had to struggle to go from home to their 9-5 jobs, often using gas-guzzling cars because they were all gas-guzzlers, it’s not like people had much choice in the matter… that’s what you did to make a living.

The post makes an interesting statement: “When products are turned into services, no one has an interest in things with a short life span.”  This point is dubious: It has been demonstrated by the public that, when products become services, the public no longer cares about a product’s life span; it only has to work when the public wants it, and no consideration is given for how long it will last afterward.  This, again, is the hallmark of a disposable economy, and it tends to lead to more waste, higher costs and cheaper goods.

The post also suggests that environmental problems seem far away.  So, global warming and the ravages of climate change—extreme and unprecedented weather, catastrophic flooding in areas and droughts in others, sea level rise, dying oceans, etc—have been reversed in 12 years?  Bravo.  And another dubious statement: “Nobody would dare to touch the protected areas of nature because they constitute such value to our well being.”  I’m beginning to doubt the author has ever been to an American national park.

In fact, it’s possible that the reasons I don’t agree with some of the author’s suggestions are simply because I’m not Danish.  I suspect that some of the attitudes expressed by the post are more consistent with northern European attitudes and institutions, which are significantly different than American attitudes.  That doesn’t make them wrong; but Denmark and the U.S. are very different countries, and due to the differences in scale between them, what might make sense in one country might not work the same in another.  As an example, small countries can afford to roll out things like internet service to every household, while in vast countries like the U.S., providing internet service to every household is magnitudes of order more expensive, and provided by privately-owned profit-based companies instead of governments, and so has not been accomplished yet.  (If ever.)

Near the end, the blogger expresses dismay at those who rejected the wonders of technology and left the city (presumably to live in Yurts and hunt their own food), and are clearly not enjoying the experience of free everything and total leisure.  I wonder with dismay about all the people who want in on city life. Granted there will be people who want to live the old-fashioned life of working for wages and buying everything you need… but I’m pretty sure there will be a significantly larger population who’d rather live the easy life of the city.  And if that city isn’t already inundated with people like that… someone must be actively keeping them out.  Are there fences and walls around the city, outside of which, hordes of people fight to get in?  Or are they kept at bay with continuing supplies of free goods thrown over the walls to placate them? 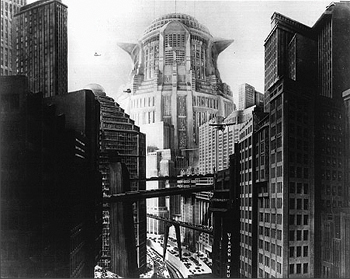 So, ultimately the post’s city is yet another example of a Metropolis of elites, living in their ivory towers, while the rest of humanity slaves away at its feet and wishes to somehow be granted entry into a world of leisure and plenty.  Maybe the only way this fully subsidized, disposable economy can exist is on the bent and broken backs of unseen workers, the ripened fruit of others’ labors outside the city.

Or, at the very least, a city that uses technology in the most extreme ways, producing at impulse and disposing of used items as quickly, and refusing to share its gifts with those outside the city in the belief that the outsiders would rather live the life of a busy, dirty, cruel past.  The blogger writes off those outside the city as Bohemians, and feels sorry for them.

You can see that I wasn’t too impressed by the post: Too lacking in detail about the technology that transformed the poster’s life, yet too full of assumptions about what makes a good life; the speaker has a low opinion of people who don’t agree with that assessment; and no interest in trying to take the gospel to the outsiders to improve their lot.  It’s a fairy tale with a thin, fragile backdrop that barely conceals the machinations behind it.  The concerns of technology are totally lost behind the social implications of a no-effort, no-cost lifestyle enjoyed by only a few.

I’m not confusing the story with the author, and I understand that Auken is not a fiction writer; but I don’t see that she provided enough to base a useful conversation on the future pros and cons of technology in 2030.  Hopefully the discussion at the Global Future Councils was more constructive… I would have been at a loss to contribute much.