I’ve recently been running across mentions of this, the NASA concept for a Deep Space Gateway project, now known simply as Gateway.  A great resource to get a newcomer up to speed is on Russian Space Web.  And the concept has some good things going for it.

The basic idea is to create a facility orbiting the Moon, a modular system similar to the International Space Station (ISS) orbiting Earth.  But instead of being devoted to research, the Gateway facility would act as a depot between rockets from Earth and landers destined for the Moon.  The theory is that Gateway would provide a more efficient, reusable, sustainable platform for lunar traffic, allowing vehicles to arrive from Earth carrying just its passengers and some required equipment, who would transfer to dedicated lunar landers and descend to the Moon’s surface for whatever work and research they planned to do. 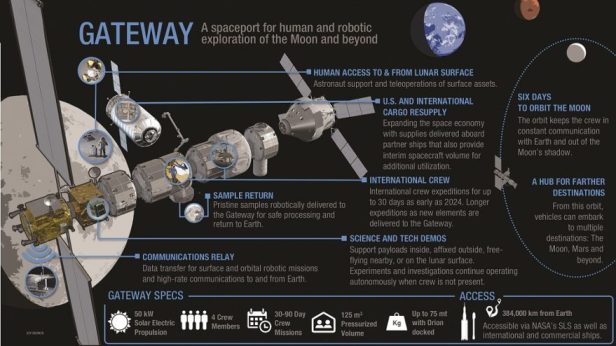 For the record, there are a number of people within NASA who think this idea is a waste of time and resources, since we can already go to the Moon using an Apollo-type system (a disposable rocket that carries a disposable lunar module and one non-disposable Orion command and re-entry craft); many of them believe we need to return to the Moon right away, and the Gateway project will just waste a decade or more and delay that return.  An article on Space News echoes much of the debate over Gateway versus established systems.

I personally think the Gateway project is a great idea.  I like the idea of reducing the amount of disposable craft involved in space travel, especially if it’s going to be a regular process.  Imagine if the ISS hadn’t been built, and the world’s space programs sent ships into orbit, to spend a few days to weeks on an experiment, then allowed the lab and all of its equipment to crash-land into the ocean after every mission.  The Apollo missions to the Moon also made one-off use of everything but the command module, allowing the rest to burn up on re-entry, remain on the Moon or eventually fall into the Sun.

Having a permanent orbital facility allows for more lengthy and extensive experimentation with minimal waste of materials—yes, the ISS can be decommissioned and allowed to burn up in re-entry, module by module, but only after thousands of experiments have been carried out.  The years that the ISS has been aloft have more than paid for it.

The Gateway project would allow much of the same level of efficiency.  If lunar landers were stored at Gateway, rockets coming up from Earth would have a larger cargo or personnel capacity than when they carried their own landers.  If fuel could be processed from the Moon, it could be stored on Gateway and used to refuel landers and ships returning to Earth, allowing for even more cargo space on each craft.  And Gateway could also be used as a depot to construct, fuel and launch new craft going to other planets, like Mars, free from the need to escape Earth’s atmosphere and gravity well in its first stage.

Gateway, in its permanent orbit around the Moon, would also serve as a platform for Moon study, providing better mapping of its surface and more penetrating surveys for valuable materials (like water), and stand as a closer platform to assist those on the surface where resources from Earth could not be dispatched in time to aid in a crisis.

Gateway, like the ISS, could also be an international facility, with various countries sharing the costs, collaborating on R&D efforts and providing assistance to cooperative ventures.  And unlike the opinions of some NASA personnel and astronauts, I don’t see any reason to hurry back to the Moon (I honestly think they are more concerned with another country making a power-grab for the Moon and its resources, but I don’t really believe that’s a legitimate issue).

This strikes me as the kind of forward-thinking idea that NASA should be pursuing, and we should be supporting.  Any sustainable platform for experimentation, resource and mission support is worth its weight in helium-3 (a possible fuel resource for power reactors back on Earth, and for rockets to other celestial bodies).  It should be our next step in creating a foothold in space.