Recently some friends and I were discussing different SF characters and series, and the subject of Doctor Who came up.  As we discussed the good Doctor, a question arose—no, not the usual “Who is the best Doctor,” “Who’s the best companion,” “How cool is Vastra/River Song/Strax/the Brigadier/etc/etc,” but a much deeper question:

Naturally, I didn’t think of this until well after we’d discussed the matter and moved on.  (Isn’t that always the way?)  But after giving it further thought later that night, It occurred to me that Doctor Who is essentially a Pulp character and a pulp series at heart.

I’ve since mentioned this to people who are into the pulps, at which point I was immediately berated for one specific reason: Pulp characters, I was told, are pulp characters specifically because they began their existence in “pulp” media; that is, the period, circa 1930s to 40s, when stories and occasional illustrated pieces were printed on cheap newsprint that was available to the public during and after WWII and sold to the masses at low prices (ever heard of the dime novel?  Bingo).  Their reasoning was, if the character didn’t have its origins in actual pulp publications, it wasn’t a pulp character. 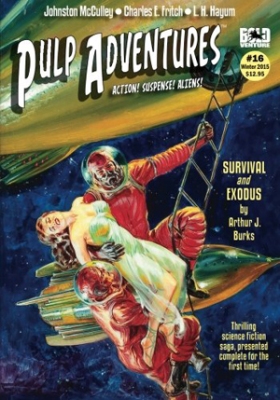 But I see this as a very limited definition of “pulp.”  Pulp wasn’t just a medium; it was also a style.  Pulp stories were designed around easy entertainment in periodic, serial forms.  They featured loose concepts, high adventure/drama/romance, unsophisticated storytelling, notable beefcake and/or cheesecake (rarely, but sometimes, extending into actual sex), colorful characters and gimmicks like the “cliffhanger,” a story that abruptly ends in the middle of a dramatic moment and promises to resolve the scene in the next installment of the story.

During the pulp era, this storytelling format was being used in the movies as well, notably, the short “serial” films of characters like Flash Gordon, Batman, Commando Cody and many others.  The elements of pulp, especially the cliffhanger, were in full evidence here, and two more elements common to movies became standard elements in the serial: Rather generic but exciting background music; and simple special effects for visual punch.  These serials opened before a feature presentation, and thanks to their format of providing a new chapter every week, drew movie audiences back on a regular basis to see how the serials unfolded.

When television developed, the serial became the weekly episode, with many of the same characters, many new ones, and the same visual and audio elements of the movie shorts.  Some ended on cliffhangers, while others ended on a “happy ever after” note, with the promise that the characters would be back with a new adventure next week.  But though many TV programs began to tell more sophisticated and intelligent stories, and began to rely more on honest drama and real-life situations, a significant number of programs were essentially based on the same style of westerns, adventures, police and detective stories that had developed back with the pulps.

When television studios started to bequeath their programs more money and resources for more fanciful tales, the first serious SF series began to appear on TV.  Despite their higher production values, it was clear they emulated the old movie productions, with their high drama/adventure formats, fanciful elements (space travel, monsters, futuristic technology) and flashy productions that had been cemented all the way back into the pulp era.

And this is where Doctor Who comes in.  As a television series, it has all the earmarks of pulp sci-fi, including recurring characters that risk and escape death every week, fanciful elements (time travel, aliens/monsters and futuristic technology) and high-drama situations.  Doctor Who was also patterned originally on the serial format, with perhaps a half-dozen story arc and cliffhangers at the end of each, until the Doctor would emerge as the hero and leave, with a recurring set of supporting characters, to start a new story next week.  Add to that a character that seemed to be literally incapable of dying, a unique premise that allowed the series to continue for decades with new actors in the title role.

And the stories were pure pulp: Fantastic sci-fi, usually more aligned with fantasy-level elements and pseudo-science, with no effort made to tell sophisticated stories or inject much (or any) real science into the premise.  Doctor Who was designed from the beginning to be fun, escapist science fiction adventure, at first not much more advanced than the old movie serials, or the pulp novels of characters like Doc Savage or The Avenger.  And though special effects and sets improved over the years, Doctor Who embodies the essential elements of pulp to this day.

So, there’s my reasoning to support the idea that Doctor Who is a pulp series.  In much the same as the original Star Trek and Lost in Space, British series like Stingray and Fireball XL-5, Japanese series like Ultraman, and countless others, are essentially pulp series, even though they were conceived or produced long after the pulp era was over.  QED an’ stuff.

If you have any comments or refutations, I’d love to hear them below.

4 thoughts on “What kind of show is Doctor Who?” 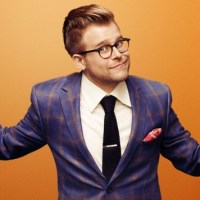