Last weekend, I’m pretty sure I felt something under my seat: Arthur C. Clarke, fist-pumping from his grave, over the recent conjectures about Pluto.

The New Horizons probe provided scientists with the best ever photos and readings of the dwarf planet, and with those readings came a lot of confusion.  The photos suggested that Pluto’s surface was not just a frozen shell of some chemicals or other, but an active surface, in motion that suggested subsurface activity.  How could that be?

Scientists put their heads together, and a theory was formed based on an odd property of water ice: When ice freezes, it can actually give off small amounts of latent heat.  In a large enough area, that can mean measurable heat.  This property applies to other chemicals besides water, and scientists surmised that all the frozen materials on Pluto may also be giving off latent heat below the surface as they freeze.  This heat is enough to liquify some of the chemicals on Pluto’s surface, causing convection-based movement of the type observed by New Horizons.

And where there is heat and liquified elements, there is often the potential to support life.  This is not to say there is life on Pluto… merely that it is entirely possible that Pluto could support life.  Scientists previously assumed a planet so far from the Sun could not support liquid elements, and therefore could not support life.  In other words, it was well outside of the so-called “habitable zone” within which it was believed there would be enough heat and liquid water for life to survive.  In the Solar System, planets from Venus outward to some of Jupiter and Saturn’s moons were considered within the boundaries of that habitable zone, and no planets or moons outside of the zone could support life.

The discovery that Pluto has the right elements to support life essentially widens that habitable zone by a significant distance. 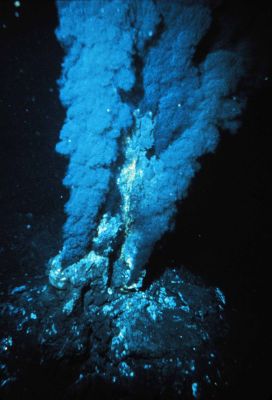 Clarke was an avid diver for a significant part of his life, and spent a lot of time under the waves, where some of the more extreme forms of life exist, many essentially unchanged for millennia.  He was elated when scientists, investigating undersea hydrothermal vents, discovered bacteria that managed to live off the incredible heat and toxic minerals ejected from the vents, in areas previously assumed to be hostile to life.  This bolstered his opinion that life was much more likely to exist off Earth and throughout the cosmos than had been accepted by scientists.  Evidence of microorganisms that manage to survive in in the cold and dark deep under the Antarctic ice were discovered five years after Clarke’s death, but surely he would have been further encouraged by the news.

The news about Pluto, further widening the habitable zone by about 2.8 billion miles (2.8 billion miles is roughly the distance from the Sun to Neptune… so another 2.8 billion miles past the orbit of Saturn), could have been enough to cause Clarke to rise out of his grave and give a whoop of joy.  As I learned of this through a program on the Science Channel, I was sure I could feel Sir Arthur’s hand pushing up at me through my sofa as he said, “Told you.  Didn’t I tell you?  Told you.”

As the esteemed Dr. Ian Malcolm once coined, “Life—uh—finds a way.”  And if there are much wider ranges where planets can conceivably support life, there is a much larger possibility that there is life out there, possibly in a wider variety of forms than previously thought possible, within this Solar System or beyond it in other star systems.  Our expected chances of someday finding extraterrestrial life have gone up significantly.