I don’t know why it took me so long, but I finally had the chance to see Under the Skin, the science fiction motion picture by Jonathan Glazer.  I say I don’t know why, because it’s not as if I was avoiding the movie… and a lot of people made sure they saw it, principally, because it starred the lovely Scarlett Johansson playing an alien who preyed on males using sex as bait… sounds hard to go wrong with a premise like that.

Under the Skin also left a lot of viewers, and reviewers, confused and perplexed.  I didn’t exactly know why, until I saw the movie for myself.  As it turns out, there’s really not much of a science fiction movie in there; the movie was actually an allegory, a storytelling tool which tends to perplex modern US audiences that expect every plot element to be blindingly obvious, and every question answered at a fifth-grade level, or their little heads explode in anguish.  Much like TV series like The Prisoner, Star Trek and The Twilight Zone, the audience must look past the set pieces to figure out what’s really being presented.

To me, the story was quite clear: I see Johansson’s character (listed in credits as The Female) as acting out the quintessential journey of young women discovering their sexuality and growing into adulthood. 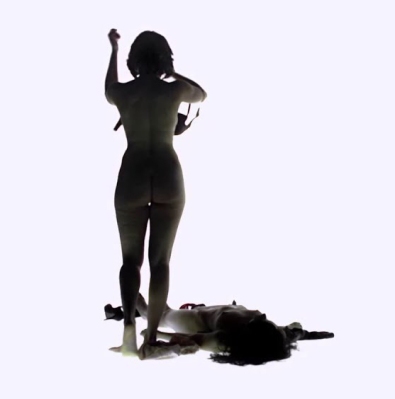 The movie opens with a man on a motorcycle.  The motorcyclist pulls off the road, walks into the nearby woods, and carries out a woman, who looks exactly like Scarlett Johansson, apparently paralyzed.  The Female appears, in a stark white space.  She and the motorcyclist strip the body and the Female takes her clothing.  I immediately imagined every young woman (or man) deciding to refashion themselves into the identity of someone they idolize, and the captured and paralyzed body representing their Idol, their essential nature captured in photospreads, interviews and appearances, which is how most people “get to know” their idols.

The paralyzed Idol sheds a tear as she is being stripped; maybe the tear represented the sadness, or maybe pity, the Idol feels upon realizing her life has ultimately been left unfulfilled; maybe she was crying for herself, as she had been reduced by pop culture to being a commercial object fit only to copy and steal from. 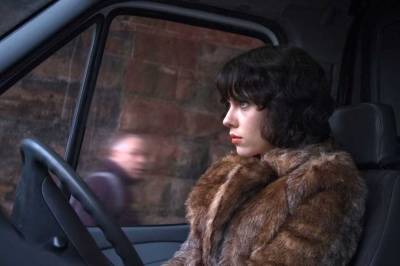 So adorned as the image of her Idol, the Female drives away in a van provided by the motorcyclist, and the motorcyclist stashes the naked Idol’s body and rides away.  I would later name the motorcyclist, whose face we never see, as the Enabler, for he tends to show up to help the Female or clean up after her.  To me, he represented the protective parent, watchful and concerned for her safety.

The Female drives into town and starts watching men from her van—her safe space—until she decides to entice a stranger into her van and back to her home, presumably for sex.  In her dark home we see the Female stripping and drawing the man to her, but before he actually reaches her, he sinks into a featureless black floor and disappears.  She immediately leaves to find a new conquest.

Her next man suffers the same fate as the first, but as he sinks into the blackness, he sees the first man, floating nearby, until his body suddenly collapses upon itself, his life essence flowing to who-knows where.  I see this as the Female using the promise of sex as a commodity to win blind loyalty and subservience from the men, and in the process sucking them dry.  The second boyfriend had a chance to see the wasted first boyfriend, and realize at that point what his prospective conquest was doing to him.

So the Female continues on in her mission to catch and consume men, with the Enabler cleaning up after as needed.  At one point, the Enabler examines her, presumably for signs of wrong intentions, as a parent might question a child’s motives and actions.  But he detects none, and walks away.

But as she spends more time among other people, she realizes that there is more to them than simple chattel.  People express kindness for others (and for her), risk their lives to save others, and except hardship in service of others.  The female starts to notice families, friendships, caring.

The Female’s life finally changes when she encounters a disfigured man and, feigning empathy, lures him to her house.  But as she leaves him to die, she seems to see a figure in the dark; her true form.  She examines herself and her actions, and begins to realize what her actions are doing to the men… and that it’s not right.  She decides to free him, abandons him and runs off to rethink her life and mission.  In the meantime, the Enabler captures and drives off with the disfigured man anyway, witnessed by neighbors.  This suggests parents or friends unsuccessfully acting to cover up the Female’s actions.  The Enabler meets up with fellow Enablers, and they ride off in search of the Female.  But the Female has given them the slip, and the Enablers will never find her again.

After she finds herself out in the country, the Female encounters a male who shows her kindness and hospitality, and after a few days, she develops honest feelings for him.  She re-examines herself, now wanting to be seen as something other than a predator.  But an attempt at actual lovemaking with the kind man goes wrong—she examines her own vagina, as if she doesn’t seem to have the right equipment to finish the act, a suggestion of the unexpected discovery that she found herself confused by and incapable of actual love-based sex. 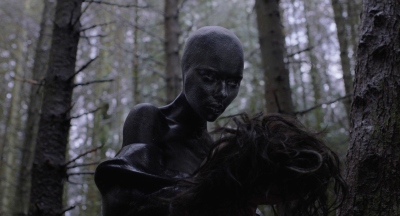 Confused, she runs again, but now she shows a newfound distrust for the men she meets; she recognizes now that she isn’t in control of her situation.  One man she encounters on a trail seems to help her with directions, but when she takes his advice and finds a shelter to rest, he returns while she sleeps and tries to rape her.  The Female runs, and perhaps for the first time, feels fear herself.  The rapist catches up to her, there is a struggle, and she escapes, but not before the rapist tears her skin—her outer persona—and discovers she is not what he expected.  The Female’s real nature is frightening to the man—or perhaps he is angered by having been fooled into thinking the Female was something she is not—and in retribution or repulsion, he decides to destroy her.  As the Female regards her outer skin as if seeing it for the first time as the disguise it was, the rapist catches her again and sets her afire, burning off her human appearance and revealing her true nature as she dies.  The Female, originally the predator, becomes the prey of men, and is finally laid bare and destroyed.

Does the Female’s death in the movie represent her forced absorption into male-dominated society, or her actual consumption by society?  Would either outcome be considered much the same thing for women?  I’ll let you decide.

This story seems to represent director Jonathan Glazer’s empathy, or perhaps sympathy, for the Female’s plight in the world: Trying at a young age to define a sexually-alluring persona and use it to bend the world to their will; coming to the realization that invented personas, and even sex, will not make them happy; and finally becoming another victim of Man’s world as their personas are torn away and their essential natures are revealed, usually by the desires and actions of Men.  The Enablers aren’t much more sympathetic, trying to shield the Female from her careless life and costly mistakes, but eventually failing to protect her because she becomes an adult and escapes their sphere of influence.  And the males she encounters are almost all pitiable specimens of manhood, being led by their genitals, many of them being threatening to the Female, and few of them exhibiting any other redeeming qualities. 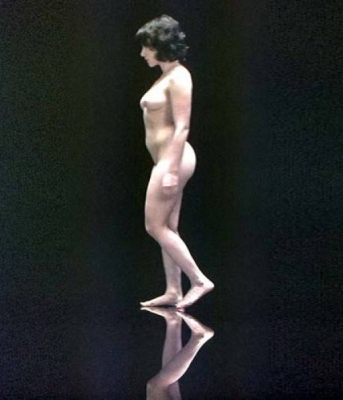 Even Scarlett Johansson’s nudity, attractive as she is, does not titillate as it would if she had been wearing sexy clothing and makeup, posing alluringly, switching her hips and uttering sweet nothings to her conquests.  She intentionally assumes neutral stances and expressions that suggest cold calculation rather than warmth; the movie suggests that all she really needs to attract a man is to possess a vagina… and that possession is the sole instrument of her ultimate downfall.

Maybe Under the Skin would have been more popular if it had been filmed in a more salacious and over-the-top style, as is standard today for most sci-fi flicks; but Glazer’s low-key direction, lack of distinct soundtrack and subdued palette gave the movie an almost documentary style that most American movie audiences simply can’t appreciate these days.

I realize most of my regular visitors, upon reading this post, will understand what I’ve just described (and may have opinions or challenges about my conclusions, or points I missed); whereas many other people wouldn’t get much further than the second paragraph.  C’est la vie.  My opinion is that stories like this are too few and far between, unfortunately because of their unpopularity with general audiences and unsophisticated critics who get confused about anything beyond the concept of aliens and other planets standing in for other countries and nationalities.  Ultimately we’re better off with more movies like this, so we as an audience have more to consider and discuss than the value of a joke or the size of an explosion.